We paid a visit to my old junior high (formerly a high school) in Port Elgin, NB. The school has been closed for years now but I attended grades 7 and 8 there in 1987-89. It is now owned by Atlantic Windows and used as a warehouse, I believe.

Check out this historical excerpt from Tantramar Heritage Trust article “It Was A School Like No Other:” Port Elgin’s Regional Memorial High School:

On the evening of Sept. 7, 1948 all roads led to Port Elgin. The occasion was the official opening of the Regional Memorial School by the Lieutenant Governor Hon. D. L. MacLaren. It had been suggested that the new facility might be named in honour of Magee; but he rejected the idea. Instead he suggested that the school “be dedicated in memory of the fallen in two world wars.”

Estimates of crowds are often unreliable; however, there is agreement that on this occasion, the auditorium was “filled to overflowing;” as upwards of 1,000 people were in attendance. Magee was in the chair and confessed “with pride” that he felt like ”Joe Louis after winning a championship boxing match.” Dr. Fletcher Peacock was also present and reminisced about his long career in education.

If anybody has information about the rickety, condemned-looking old ‘Orange House’ pictured below which is situated across the road from the old school, please let me know. There must be a good story there. 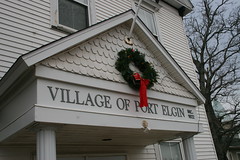 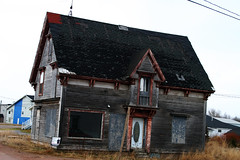 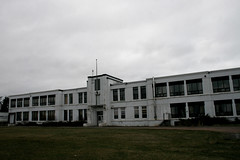 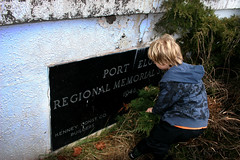 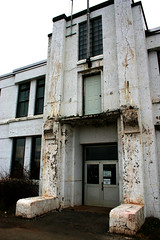