I told you my mother has a talent for finding unique travel adventures, well nothing I have experienced will ever compare to Juni’s Sail & Snorkel Trips in Caye Caulker. I don’t know how she found it because Juni Zaldivar is a very private man. You can see in my picture, his windows are all boarded up! In fact, he swore us not to tell anybody about what we witnessed that day, and that’s part of the reason why I never blogged about this before. Honestly, I figured the guy would be retired by now! But upon some Googling I discovered somebody else had already told his story online as recently as 2010.

Amazingly, the story they tell is exactly as I remember it. So here it is, I copied this passage below directly from The Jordan Family’s travel blog. The black and white portrait of Juni is theirs as well.

I Kissed a Shark and I Liked It

by The Jordan Family

As I learned from personal experience, puking off the side of a sailboat on your way to a snorkeling expedition has some real advantages. For starters, it draws more fish, nurse sharks and manta rays toward the boat, as they think they are being fed (and by more, I mean dozens). Secondly, it gives your body a chance to purge any unease that could prevent you from fully appreciating what will be, arguably, one of the most amazing experiences of your life.

Today, I am still trying to absorb and process everything that we experienced yesterday on our first ever snorkeling trip. On Monday night, we went to the home of Juni Zaldivar, one of Caye Caulker’s oldest and most revered citizens. We were making plans to sail with Juni the following morning and needed to be fitted for our snorkel gear. At first glance, Juni seemed to be a somber – almost angry – man and I was concerned about how he would interact with all of us. However, once he saw Bill’s feet and joked that he would, maybe, just wrap some duct tape around his toes for webbing – because they don’t make flippers that big – I knew we would be just fine.

At one time, this island was filled with fishermen who built their own boats. Today, unfortunately, Juni is the sole boat maker on the island. His current boat, that he completed about a year and a half ago, was built by him, completely by hand and without the use of power tools. Even the sails were sewn by Juni on a small, hand-cranked sewing machine in his kitchen. It took him about 6 months – sun up until sun down – to complete it, and there is a part of Juni’s soul in every detail of his boat.

While sailing to our first destination, Juni talked to us about his connection to the sea and the incredible creatures that live there. We were, as he told us over and over, about to enter their world and we needed to do so with grace and the utmost respect. He told us how, at 9 years of age, he began taking daily swims to and from The Reef in an effort to escape an abusive father who beat him daily. He stayed out of school and spent his days at sea – the only place he felt happy. At 13, he apprenticed with a local boat maker and by 15, he was crafting his own boats by hand. Juni’s connection to Caye Caulker and his simple island life is so strong that when his wife and 5 children began to discover the outside world and got seduced by it’s materialism, he sent them to live in The States without him. This place, he said, is his whole world and the only world he ever wants to know.

Caye Caulker is located less than one mile from Belize’s Barrier Reef – supposedly the 2nd largest reef in the world. The Reef is a protected area of Belize and is an attraction to scuba divers and snorkelers from around the globe. Ecotourism is one of Caye Caulker’s biggest industries (along with lobster fishing). In fact, when we got to The Reef, we were surrounded by several other boats crowded with overpaying tourists who swam close to their boats while their “guides” sat comfortably on deck. We felt so fortunate to be with Juni.

We arrived at The Reef about an hour and a half after we set sail (about the time that my breakfast decided to make a reappearance) and prepared for our first swim. Henry fearlessly jumped right into the water with the sharks and they rays, followed by Caroline, Bill and Bijan and Wilmana (a beautiful Dutch couple that was with us). Juni stayed with me and talked me through mentally overcoming my seasickness. When my puking stopped, and I was able to get my mask on, Juni and I joined the others. It changed my life.

Juni guided us far from the boat so we could fully experience the sea. Immediately, he was surrounded by fish, nurse sharks and manta rays who seemed to know him intimately. He led us over coral, which at times was only an inch or two below us, to areas where entire schools of brightly colored fish were hiding. He cuddled with sharks and rays as if they were kittens. At one point, Juni grabbed my arm and pulled me toward him. With his other hand, he “called” one of his sharks. He held the shark, turned it over and, after stroking its belly for a minute, signaled me to kiss it. I later couldn’t believe it, but without thinking, I kissed that shark like I would one of my own children. Amazing! Because of Juni’s guidance and expertise, we were all so at ease – even the kids touched the shark (though Henry said that he was so scared that he thinks he peed)! Just before we went back to the boat, Juni again grabbed me and motioned for me to float on my back. I wasn’t sure what he was up to, but by this point he had earned my trust so I did what he said. I tried to stay calm as he carried a giant manta ray over and placed it on my chest. It felt like a heavy, wet wool blanket covering me as it swam up and over my face. I’m not sure I’ll ever have another experience when I can say that I kissed a shark and hugged a manta ray all in the same day!

After exploring and experiencing for over an hour, we were back on the boat. Juni gave all of us sliced oranges to remove the salt from our mouth while he told more unbelievable tales. He told the story of a time, about 10 years ago, when he came upon a shark that had been speared by a fisherman and left for dead. He carried her to a more protected area and fed her. He returned to feed and nurse her everyday for the next month. Eventually, he saw her tail moving furiously and knew that she would survive. All of a sudden, he noticed something on the underside of the shark’s body and quickly realized that she was giving birth! He helped her deliver 2 babies (though only 1 would survive) and he continues to visit and play with the shark’s ‘grandchildren’ today.

We sailed for about another half hour to a different location along the Reef. This time, we got in the water and swam with sea turtles! I couldn’t believe it! They were only about a foot away from us, but Juni asked us not to touch them – just observe – so we obliged. We watched with amazement as they swam along and fed on the turtle grass that lines the ocean floor. They were like nature’s lawn mowers, eating constantly and clearing huge patches of ocean floor. I thought Caroline was going to cry with emotion – it was so beautiful! We swam in this location for another hour – which was about all Caroline’s tired little body could withstand – and got back into the boat.

It took us about 2 hours to slowly sail back to the island, during which time we drank coffee and ate delicious sugar cookies that Juni had prepared. We spent some time talking to Bijan and Wilmana, but mostly, we were quiet and thoughtful. We were all trying to wrap our minds around the gift we had just been given.

I had mixed feelings about writing this story. Juni is an intensely private man who wants his world to remain unchanged. There is something so peaceful and comforting about listening to him. When I asked if I could take his portrait, it was obvious that he is not comfortable in the spotlight. He said that he did not want to be all over the “Damn Internet” where the gringos would learn how to find him. National Geographic came to the island a few years ago to do a documentary about Juni and his life here, but he would not release the rights and they were not able to make their film. After some thought, though, I decided that there are great lessons for all of us in hearing Juni’s story. He is a man who, despite hardships that would challenge even the strongest among us, is at peace and harmony with the simplicity of his life and who has a truly spiritual connection to the sea. At 71, Juni Zaldivar may not be around to inspire the world for too much longer. When Juni passes, Kim says, Caye Caulker will lose a piece of it’s heart. So, too, will I.

…and there you have it. The Jordan family nailed it. Some of that stuff I had forgotten but they took me right back. Now check out my own photos from that day in 2004.

(Mom poses with Juni. Notice he’s wearing the same necklace as in the Jordan Family’s portrait above.)

(Dr. Doolittle of the sea)

(An unforgettable day. Thank you Juni.) 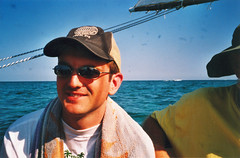 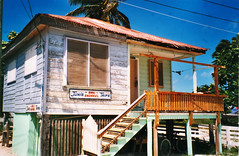 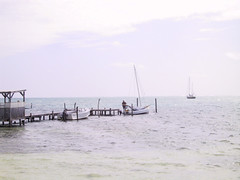 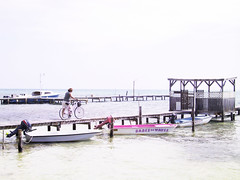 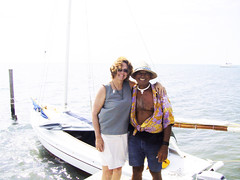 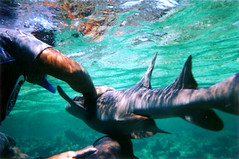 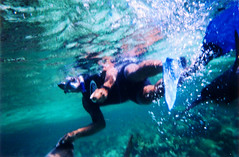 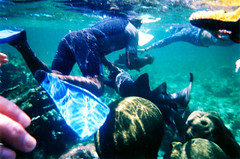 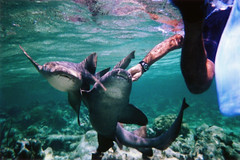 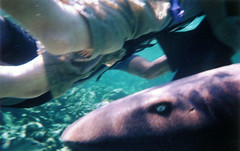 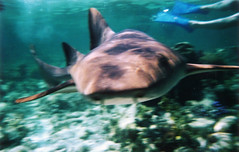 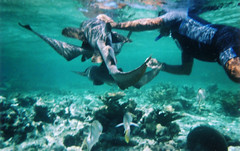 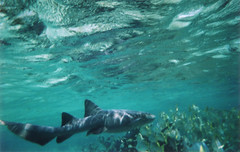 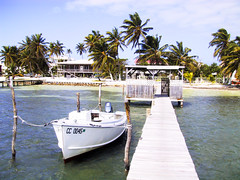 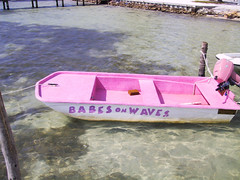 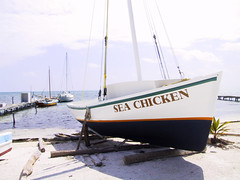 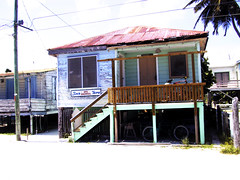 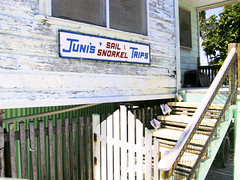