I have always been intrigued by eastern culture. While exploring invitation designs for our upcoming Muslim-Christian fusion wedding, Fatima and I discovered a very fascinating artist, journalist and calligrapher by the name of Josh Berer.

From his commissioned design site:

I came to calligraphy from two directions. The first has to do with my upbringing: my mother is a professor of Islamic Art History, and my father is a bookbinder and makes illuminated manuscripts of his poetry. Between them, there is a pretty decent library of works on Islamic design, calligraphy, typesetting, paper arts, and illumination from which to draw inspiration growing up. The second direction is my past experience with art: starting when I was 14, I immersed myself in the world of graffiti, and so coming from that background, the art of the written word is familiar, although from a rather different perspective.

Below is a video excerpt from his blog website “Nomad Out of Time”:

When I got to college, I started learning Arabic and encountered Arabic calligraphy. I was sitting and sketching a piece of graffiti, and it dawned on me that graffiti in Arabic was almost heaven-sent. The flow of Arabic letters lend themselves so naturally and perfectly to graffiti that I couldn’t help but to try it.

Shortly thereafter, though, I had a second realization. To jump into an ultra-modern manifestation of Arabic calligraphy such as graffiti without a firm grip on the traditional is, in my opinion, disrespectful. I feel that to do graffiti in Arabic, I first must pay my dues and learn where the roots are. So, for the moment I’ve put Arabic graffiti on hold. However, graffiti will always be a huge influence on my calligraphy, and that is something I’m forever going to bring to the table.

After I graduated college, I moved to Sana’a, Yemen, where I enrolled in private classes to do advanced work in Arabic grammar, literature, and Islamic studies. My teacher, fortuitously, was also a calligrapher, and so in addition to homework in grammar and vocabulary, he also assigned calligraphy homework. In the six months I spent in Yemen, I spent 2 to 3 hours a day practicing calligraphy.

Since 2003 I have moved to a different place every year, with Sana’a, Istanbul, Jerusalem, Amman, Los Angeles, Seattle, and New York all in the mix. I keep a regular blog where I write about projects I’m currently working on, and things going on in my life. I graduated from the University of Washington in June of 2007 with a degree in Near Eastern Languages. While my focus was in Arabic, Hebrew and Turkish also played roles. I am 25.

During his many travels however, Josh and his girlfriend, photojournalist Rachael Strecher did a lot more than learn calligraphy. Here is an article written about them in the Jewish Daily Forward:

Josh Berer made a decision when he arrived in Yemen: He would tell people he was Christian. He had taken this precaution before — when he lived briefly in Jordan — but now, in the heart of the Arab world, where antisemitic rants blared at him constantly from loudspeakers and “Jew” was synonymous with evil, it was a necessity.

And it worked. Except for those few times when a Yemeni would begin to question him about his “religion.”

“Suddenly I found myself having to defend the concept of the trinity,” Berer said.

It was just one of the absurdities that Berer, a Canadian Jew and recent graduate of the University of Washington–Seattle, encountered during his time in Yemen.

But the ploy enabled Berer and his girlfriend, photojournalist Rachael Strecher, to spend time with the last remnants of Yemen’s endangered Jewish community. Berer’s report and Strecher’s photos are featured in this issue of the Forward.

Josh and Rachel’s reports from their time in Yemen:

“A Lens on Yemen’s Remaining Jews” is an audio slideshow by Rachel, featuring her photography. More of her work can be found here and I have included some of my personal favourites below.

A settler protests as he is carried by Israeli police officers during the eviction of settlers from a house in Hebron, a town in the West Bank August 7, 2007 (AP Photo/Rachael Strecher) (image by Rachael Strecher)

Graduating members of the Palestinian Security Forces give a demonstration of their skills August 19, 2007 in the Palestinian city of Ramallah. (AP Photo/Rachael Strecher)

After being completely intrigued by Josh’s life, I decided to hire him. So using Josh’s calligraphy design site which includes an easy to use shopping cart, I commissioned him to write my name and Fatima’s name in Arabic Calligraphy.

What I love about Josh’s style is his fondness for the traditional tools used in ancient calligraphy. He cuts his own pens from bamboo and even makes his own ink from a by-product of kerosene lamps mixed with gum arabic, as explained in his recent blog post.

This is what he created for me:

Now my name is not so special in Arabic as Fatima’s, although it is the name of a city in India! She is named of Fatimah, daughter of the Islamic prophet Muhammad, and wife of Ali. The Qur’an itself is written in purely Arabic:

Muslims believe the Qur’an to be the book of divine guidance and direction for humanity and consider the text in its original Arabic to be the literal word of God, revealed to Muhammad through the angel Gabriel over a period of twenty-three years and view the Qur’an as God’s final revelation to humanity.

The Qur’an’s message is conveyed with various literary structures and devices. In the original Arabic, the chapters and verses employ phonetic and thematic structures that assist the audience’s efforts to recall the message of the text. There is consensus among Arab scholars to use the Qur’an as a standard by which other Arabic literature should be measured. Muslims assert (according to the Qur’an itself) that the Qur’anic content and style is inimitable.

Richard Gottheil and Siegmund Fränkel in the Jewish Encyclopedia write that the oldest portions of the Qur’an reflect significant excitement in their language, through short and abrupt sentences and sudden transitions. The Qur’an nonetheless carefully maintains the rhymed form, like the oracles. Some later portions also preserve this form but also in a style where the movement is calm and the style expository.

Because the Qur’an is spoken in classical Arabic, many of the later converts to Islam (mostly non-Arabs) did not always understand the Qur’anic Arabic, they did not catch allusions that were clear to early Muslims fluent in Arabic and they were concerned with reconciling apparent conflict of themes in the Qur’an.

So all of this inspired me. I wanted to take things to the next level and add something special to our wedding ceremony to celebrate us and the long history of how we came together (which is a whole other miraculous story). I decided that Fatima’s name in Josh’s calligraphy with all of its themes and meanings, held the perfect symbolism for a tattoo to accompany my wedding band!

So I consulted my lifelong friend (and best man), Donut, who was been trying to convince me to get a tattoo for over a decade. And truly it is not something I ever even considered before, believe me.

I explored local Vancouver tattoo shop Adrenaline Vancity and found the artist, Mike Dawkins, who was clearly an expert at scripted tattoos (which due to their fine nature, are quite challenging). He loved the idea and we arranged a consultation and appointment. You can see the end result below! 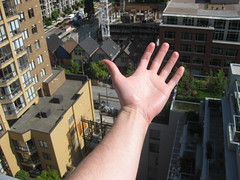 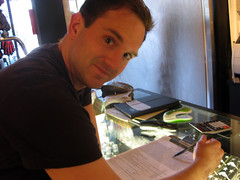 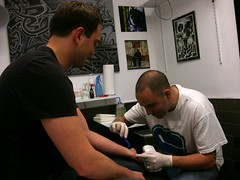 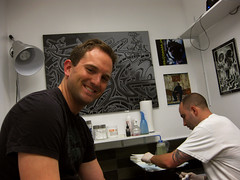 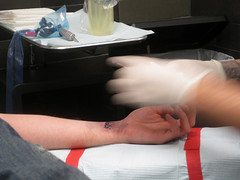 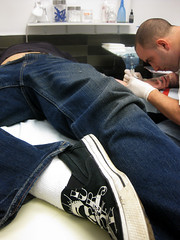 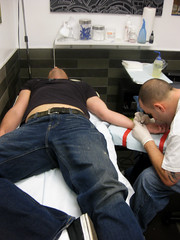 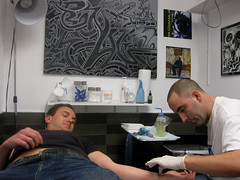 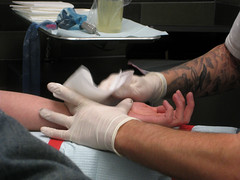 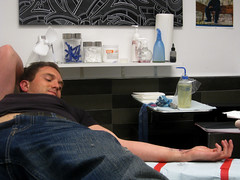 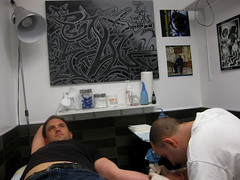 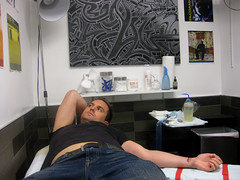 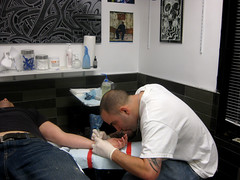 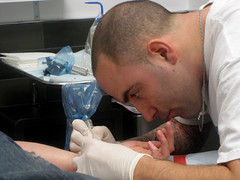 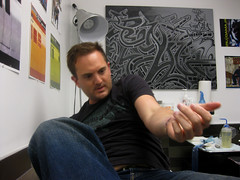 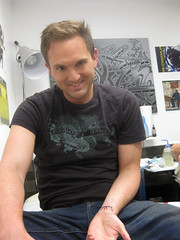 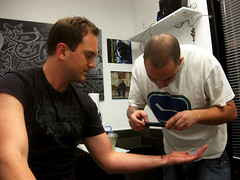 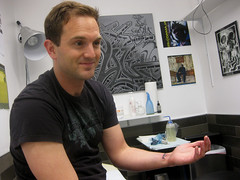 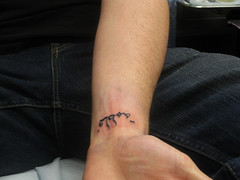 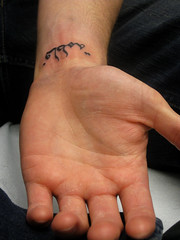 Many thanks to all the artists and inspirations involved!